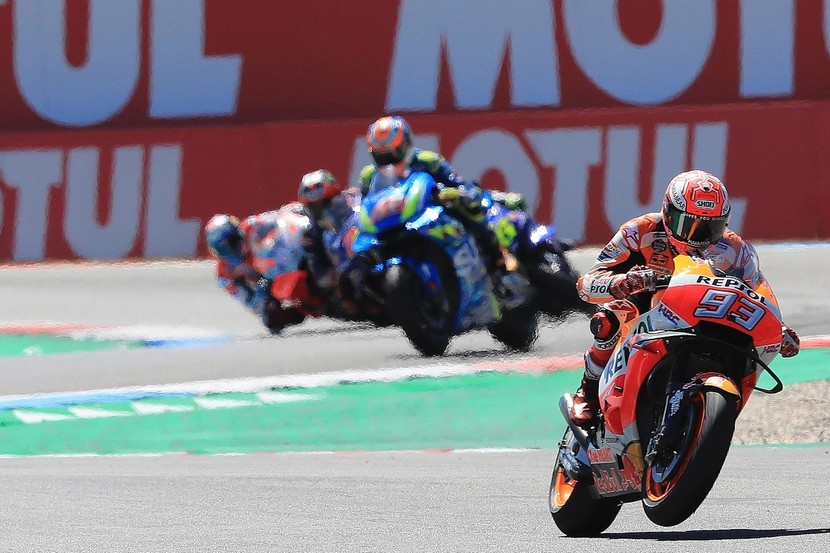 We’ll show you how to get an Andalusia Grand Prix live stream from anywhere in the world so you don’t miss a second of the action at the Circuito de Jerez this weekend.

The 2020 MotoGP season is in full gear after last weekend’s Gran Premio Red Bull de España but the teams and riders will be staying in Spain for one more week for Sunday’s Andalusia Grand Prix and we have all the details on how you can watch the race on TV or online.

At last weekend’s race, Petronas Yamaha SRT’s Fabio Quartararo came in first place with a time of 41 minutes and 23 seconds. However, the biggest story at the Gran Premio Red Bull de España was how eight-time world champion Marc Márquez lost control of his bike and crashed with just four laps remaining in the race. Although Márquez suffered a broken arm and had surgery, he passed his fitness test and has been cleared to participate in the Andalusia Grand Prix.

Just like last weekend’s Gran Premio Red Bull de España, the Andalusia Grand Prix will be held at the Circuito de Jerez in Spain. Since two Grand Prix can’t have the same name, this weekend’s race will be named after the country’s Andalusia region where the event will be held. In fact, this will be Jerez’s first-ever Andalusia Grand Prix. The Circuito de Jerez has 13 turns, a circuit length of 2.751 miles and the race itself will consist of 27 laps. Márquez still holds the fastest lap record on the course with a time of one minute and thirty eight seconds on lap 15, though his times may suffer this weekend as a result of his recent injury.

With Márquez not in full form, Quartararo will likely try to win his second Grand Prix in a row this weekend. However, he’ll face strong competition from Monster Energy Yamaha MotoGP’s Maverick Vinales and from Ducati’s Andrea Dovizioso.

We have all the details on how you can watch the 2020 Andalusia Grand Prix in the U.S., Canada, UK and Australia further down in this guide. However, if you’re currently traveling or live in a country without an official broadcast option you won’t be able to watch MotoGP this weekend.

That’s where one of the best VPNs (Virtual Private Network) can really come in handy. They allow you to virtually change the IP address of your laptop, tablet or mobile to one that’s back in your home country which will let you watch as if you were back there.

VPNs are incredibly easy to use and have the added benefit of providing you with an additional layer of security when surfing the web. There are also a lot of options but we recommend ExpressVPN as our top pick due to its speed, security and ease of use. The service can even be used on a wide array of operating systems and devices (e.g. iOS, Android, Smart TVs, Fire TV Stick, Roku, game consoles, etc). Sign up for ExpressVPN now and enjoy a 49% discount and 3 months FREE with an annual subscription. You can even test it out for yourself thanks to the service’s 30-day money back guarantee. Looking for more options?

Live stream the Andalusia Grand Prix in the U. S.

If you live in the US and are a cable subscriber, you’ll be able to watch the Andalusia Grand Prix on NBCSports and the network will begin its coverage of the event at 8am ET / 5am PT on Sunday, July 27. If you’d rather stream the Andalusia Grand Prix online, you can do so on the NBCSports website but you will need to login with the credentials from your cable provider to do so.

Alternatively, if you’re a big MotoGP fan and don’t want to miss a single event, you can sign up for MotoGP VideoPass. The service costs either $34.32 per month, $41.19 for the quarter or $160.20 with an annual subscription. For the price though, you can watch every Grand Prix live or OnDemand in 1080p and you also get access to MotoGP VideoPass’ apps for PC, Mac, Android, iOS, Roku, AppleTV, AndroidTV and Amazon FireTV. Keep in mind though that you will be charged in Euros and these prices are just an approximation of the current exchange rate with the US dollar.

Don’t want to sign up for cable just to watch the Andalusia Grand Prix, don’t worry as there are now a number of streaming services, all at different price points, which will give you access to NBCSN so you can watch all the action at the Circuito de Jerez this weekend. We’ve listed a few of our favorites below to make things easier for you.

Subscribe to Sling TV now and get 3 days of access for free to try it out!
$30 at Sling
Watch the Andalusia Grand Prix in Canada

Canadian MotoGP fans can watch the Andalusia Grand Prix on beIN Sports beginning at 8am ET / 5am PT on Sunday as the network has the rights to broadcast every Grand Prix in MotoGP’s 2020 season. If you’re not a subscriber yet, you can sign up for BeIN Sports for $14.95 per month or save a bit by going with the annual pass for $164.95.

UK viewers will be able to watch this weekend’s Andalusia Grand Prix on BT Sport as the network holds the exclusive rights to broadcast MotoGP in the country. BT Sport’s coverage of Sunday’s race will begin at 1pm BST.

MotoGP fans in Australia will be able to catch all the action at the Andalusia Grand Prix on Fox Sports but you will need to be a Foxtel subscriber to watch. The network will show the race at 10pm AEDT on Sunday evening.

If you’re not a Foxtel subscriber and still want to watch MotoGP this season, you can watch every Grand Prix on Kayo Sports. The service costs between $25 and $35 per month depending on the package you choose but new customers can take advantage of Kayo Sports’ 14-day Free Trial to watch the Andalusia Grand Prix.
Andalusia Grand Prix Teams and Riders
Aprilia Racing Team Gresini

We may earn a commission for purchases using our links. Learn more.