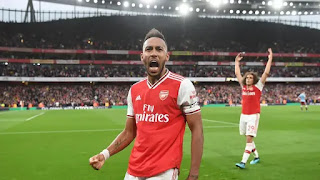 Aston Villa are fighting for their Premier League future as Arsenal come to town tonight.

Villa sit three points from safety with two games remaining, so Dean Smith’s side must either beat Arsenal on Tuesday or West Ham on Sunday to stay up.

As for Arsenal, Mikel Arteta’s side have had a dramatic week, bouncing back from last weekend’s north London derby defeat to first beat champions Liverpool and then reach the FA Cup Final by stunning Manchester City.

The Gunners remain outsiders to qualify for the Europa League, but Arteta will want a strong run-in – and possible FA Cup glory – in a bid to persuade owner Stan Kroenke to back him in the summer transfer market.

Aston Villa vs Arsenal is scheduled for a 8:15pm BST kick-off on Tuesday, 21 July.

The match will be behind closed doors at Villa Park with no fans due to be present due to government guidelines regarding coronavirus.
In Pictures | Arsenal vs Man City, FA Cup semi-final | 18/07/20

TV channel: Aston Villa vs Arsenal will be shown live on Sky Sports’ Premier League and Main Event channels and is available via Now TV with a day pass for £9.99, or a three-month pass on offer for £25.

Live stream: Sky Sports subscribers can stream the match online via SkyGo and the SkyGo app, with a mobile month pass available for £5.99.

Wesley (knee), Tom Heaton (knee) are Bjorn Engels (calf) are out for Villa.

Neil Taylor (thigh) is a doubt, but Kortney Hause and Danny Drinkwater should be available.

Arsenal have a lengthy injury list with Bernd Leno, Gabriel Martinelli, Calum Chambers (all knee) and Pablo Mari (ankle) out.

Shkodran Mustafi is a doubt after suffering a hamstring problem vs Man City, while Mesut Ozil and Matteo Guendouzi have been excluded by Arteta.
In Pictures | Arsenal vs Liverpool | 15/07/2020

Arsenal are in form, but their last two wins have come from sitting deep against teams who have dominated the play.

It will be interesting to see how Arteta adapts, though he may prefer to set up in a similar style given Villa need the win.