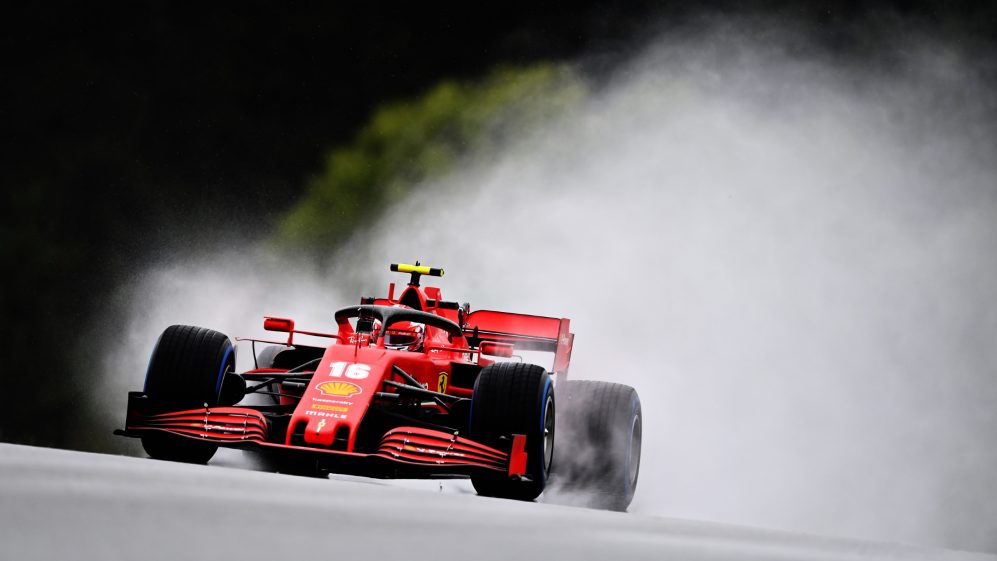 It’s on days like this, when rain creates tricky driving conditions, that the great drivers come to the fore – and as if we needed further reminding, Lewis Hamilton showed us why he is arguably the greatest driver in Formula 1 history with a scintillating lap at the Red Bull Ring to beat the heir to his throne Max Verstappen to pole by a staggering 1.2s for the Styrian Grand Prix.

Wet weather raised doubts as to whether qualifying would happen at all on Saturday, with final free practice cancelled because of the treacherous conditions, but there was a window of opportunity when the rain eased to the point where the Race Director Michael Masi deemed it safe to get the session under way.

With the track remaining wet throughout, full wet Pirelli tyres were the compound of choice, and the drivers opted to fill up with a little more fuel than usual so they could complete a flurry of laps in quick succession. But there were two drivers who looked the most comfortable out there – Hamilton and Verstappen.

The two main protagonists traded fastest laps as the session unfolded, the kind of battle for pole position that Formula 1 craves, with Hamilton holding the early upper hand.

Verstappen repeatedly complained about the poor visibility on team radio, but it didn’t seem to slow him down, the Dutchman setting the fastest first sector on his final lap to raise hopes he could topple Hamilton.

But he was really fighting the car as he came through the middle sector, catching it three times as the rear snapped, but he could do nothing about his rear stepping out as he negotiated the penultimate corner, pirouetting round and ending any hopes of topping Hamilton.
Formula 1 Pirelli Grosser Preis Der Steiermark 2020
Qualifying results
POSITION TIME
1 Lewis Hamilton Mercedes 1:19.273
2 Max Verstappen Red Bull Racing 1:20.489
3 Carlos Sainz McLaren 1:20.671
4 Valtteri Bottas Mercedes 1:20.701
5 Esteban Ocon Renault 1:20.922
VIEW FULL RESULTS

Mercedes would have almost certainly told Hamilton what had happened to Verstappen, but he cared not. He was in the zone, lighting up the timing sheets and keeping his foot to the floor to obliterate his previous best and take pole by an extraordinary 1.2s.

There were plenty of standout performances elsewhere, Carlos Sainz – a driver who usually excels in wet conditions – hooking up a tasty lap to seal third, his best-ever qualifying position, with last weekend’s race winner Valtteri Bottas fourth, in what his worst qualifying session on this track since joining Mercedes.

Esteban Ocon’s start to life at Renault continued to be rosy, as he finished a brilliant fifth – Renault’s best start since Monza last year, while Lando Norris, who was feeling better after suffering chest pains on Friday, qualified sixth. That’ll become ninth following a three-place grid penalty for failing to slow sufficiently for yellow flags.

Alex Albon was seventh, with Pierre Gasly eighth – in what was his fourth Q3 appearance in the last six races, with Daniel Ricciardo ninth and Sebastian Vettel rounding out the top 10 in one of the most thrilling qualifying sessions in recent times.
1255589589
Lewis Hamilton pulled out all the stops to set an incredible time in Q3 at a soaked Red Bull Ring for pole position
Q1 – Russell stars in wet conditions as Giovinazzi crashes

For much of the morning, it was unclear whether we would get any running, so persistent was the rain, but the conditions eased sufficiently to allow the drivers to head out on full wets and get qualifying under way, albeit 46 minutes later than expected.

Vettel was the first out, having sat at the end of the pit lane for around four minutes at the head of the queue, waiting for the light to go green. Teams fuelled their cars heavy so the drivers could complete a series of laps, gaining confidence each time.

Romain Grosjean skated off track, before retreating to the pits, the team reporting they had a suspected water pump issue, while Alex Albon had a little spin up at Turn 3.
1255592703
Alex Albon spun in the tricky conditions in Q1

As conditions improved, the times tumbled, with Hamilton setting the pace. At the other end, Sergio Perez, who impressed on Friday, looked uncomfortable with the car and failed to make the cut-off.

Kimi Raikkonen also missed the cut, along with Alfa Romeo team mate Antonio Giovinazzi, who lost control when he ran wide onto the paint, and tapped the barrier rear first, bringing out the red flags. Latifi was forced to back off and therefore got knocked out, with Grosjean failing to get back out on track.

It meant Russell made it through to Q2 for the first time in his career, with Williams having their first Q2 appearance since the 2018 Brazilian Grand Prix.

The rain eased further ahead of Q2, but with the track so wet, the full wet tyre was required as the drivers headed back out for another spin.

While Hamilton and Verstappen were impressive, separated by a mere tenth of a second at the front end of the field, it wasn’t so smooth for Ferrari as Vettel and Leclerc fought to scrape into Q3.

Vettel just made it in 10th, but Leclerc wasn’t so lucky, the Monegasque – who finished second in Austria last weekend – the first to miss the cut, a fraction ahead of Russell – who was just a tenth shy of making Q3 for the first time in his career.

Lance Stroll couldn’t replicate the pace he showed in the dry, and ended up 13th, ahead of Daniil Kvyat and Kevin Magnussen. As the cars pulled in, the rain intensified, setting up some treacherous conditions for the final segment of qualifying.
1255590078
Carlos Sainz secured third on the grid for Sunday’s race – his best ever qualifying performance
Q3 – Rain intensifies to create tense final shoot-out for pole

Usually, drivers focus on just two runs in Q3 – but with the rain lashing it down, the approach this time around was to stay out on track and clock up the laps in the hope of getting some banker times in should the weather get even worse.

Hamilton and Verstappen traded fastest laps, while Ocon, Norris and Sainz showed their prowess in the wet by popping in some quality times to challenge the top five positions.

But the main focus was on Hamilton and Verstappen, the duo enduring a segment-long battle for pole position, with the Mercedes driver coming out on top to take his first pole in Austria since 2016 – which incidentally is when he last took victory at the venue.
1255589302
P1 for Hamilton after an incredible performance in the wet in Austria
THE KEY QUOTE

Pole-sitter Lewis Hamilton: “Honestly I am [pleased]. What a tricky day, the weather’s obviously incredibly difficult out there for all of us. A lot of the time you can’t even see where you’re going. I had one big moment the lap before the last, a big aquaplane which definitely had my heart in my mouth but I was able to improve on the next lap, nice and clean. I love these days.”
WHAT’S NEXT?

The Styrian Grand Prix kicks off at 1510 local time, which is 1210 UTC. Conditions will be completely different on Sunday, the rain making way for warm and sunny conditions which have been a fixture in Austria since the F1 family arrived last week.

Hamilton is in a great position, but Red Bull showed last week at the same venue that they can have the pace to challenge Mercedes. It’ll be interesting to see whether the Silver Arrows have overcome the gearbox issues which plagued them at the Red Bull Ring last weekend.